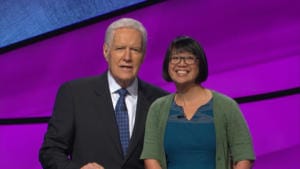 This Portland woman, a part-time reference librarian at Washington State University Vancouver, has won tens of thousands of dollars in a four-day run on “Jeopardy!”

Vichit-Vadakan’s fast fingers and trivia knowledge have put her on top of the popular game show this week, racking up $89,001 after Thursday’s show.

The 45-year-old librarian first auditioned for the show in 2018, completing the annual online trivia test (which, coincidentally, is happening later this month). Would-be contestants are given 50 questions, and have 15 seconds to answer each. Those who pass may be called to audition in cities across the United States. Fortunately for Vichit-Vadakan, there were auditions in Portland in 2018.

“There were people from Seattle, Vancouver, B.C., from all over the place who came to Portland to audition,” she said. “I got to be at home, which was nice.”

Those who pass the audition — “They want to make sure you can string together a coherent sentence,” Vichit-Vadakan said — may be offered a spot on the “Jeopardy!” stage for up to a year and a half afterward.

It wasn’t until October, when Vichit-Vadakan had all but given up hope, that she received the call to head to Hollywood.

What followed was a whirlwind. “Jeopardy!” producers shoot five episodes a day, “back to back to back,” Vichit-Vadakan said.

“The next day, you come back and do it again,” she said. “It’s very fast-paced, and it’s tiring.”

Vichit-Vadakan has been a librarian for 10 years, mostly in the Portland area. She’s been at WSU Vancouver for six months.

“Librarians are natural Jeopardy players,” Vichit-Vadakan said. “We have to know everything, especially a reference librarian.”

There’s plenty of time in the library to brush up on her trivia skills. Vichit-Vadakan said she’s often called upon by students to help with research papers on subjects like surveillance in the former Soviet Union, or the history of criminalizing mental health disorders.

“It’s fun to get these varied questions, because it allows me to flex my research muscles and dig into a topic I wouldn’t have necessarily thought up on my own,” she said.

Vichit-Vadakan couldn’t say how long she’ll be on the show, or how much money she’s won in total. She did share, however, her plans for the money: to up her cat lady game. Vichit-Vadakan has been fostering cats and kittens from Multnomah County Animal Services and the Oregon Humane Society for years, and wants to expand a spare room in her home so she can have multiple groups of cats at once. She also plans on building a “catio” in her backyard, a sort of enclosed cage where cats can have some safe, outdoor time.

Jeopardy airs on ABC at 7 p.m.