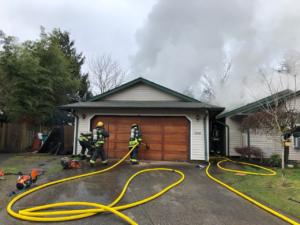 A house fire in the Cascade Highlands neighborhood Thursday was caused by unattended cooking and was preventable, according to the Vancouver fire marshal.

Vancouver firefighters were dispatched at 11:20 a.m. to the 1200 block of Southeast Park Crest Avenue.

The first arriving engine reported that the middle section of a home was on fire, and that flames had spread to the attic, Fire Capt. Pete Adams told The Columbian.

Firefighters searched the house and found a woman in a back room, behind a closed door. She was able to walk out of the home before being taken to the hospital for treatment of injuries that were not believed to be life-threatening, Adams said.

The fire captain described the blaze as “stubborn.” It took 23 firefighters about a half-hour to get the fire under control.

Fire Marshal Heidi Scarpelli said that combustible materials left next to a slow cooker caused the blaze, which resulted in more than $45,000 damage and rendered the small, one-story home uninhabitable. Four people were displaced.

“It caught the entire kitchen on fire,” Scarpelli said.

Unattended cooking is the top cause of house fires in Vancouver, the fire marshal said. Most don’t involve slow cookers, but rather skillets, stoves and other cooking equipment. Still, the risk in the same, Scarpelli said. People need to stay by their food as it cooks, or if using a slow cooker, ensure there is clear space around it.

“Stay close, because a few minutes can matter,” she said.