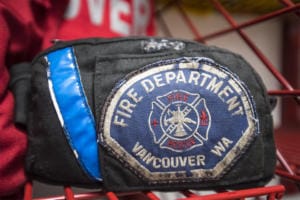 A duplex fire Saturday in Vancouver’s Cascade Highlands neighborhood was the result of an unfortunate succession of Christmas trees set aflame.

Vancouver fire crews responded at 3:24 p.m. Saturday to 1617 S.E. Blairmont Drive for a report of a residential structure fire.

The first fire engine arrived at the address in about six minutes, firefighter Eva Scherer said. A crew doused the fire from outside before entering the building and extinguishing it completely, she said.

The Red Cross responded to assist two people who were displaced, Scherer said. The fire did not extend into the adjoining unit.

A total of seven fire units were involved in the
response.

Vancouver Fire Marshal Heidi Scarpelli said the fire was caused when the occupant of the home tried to dispose of a small, tabletop Christmas tree by burning it in the fireplace.

The small tree quickly caught fire, but the flames got out of control for an indoor burn so the resident grabbed the tree to move it outside. In the process, they spread the flames to a much larger Christmas tree in the living room, Scarpelli said.

The fire was contained to a single room, but it caused about $18,000 in damage, according to the fire marshal.

“Those trees need to be disposed of differently; they consist of extremely combustible materials,” she said.