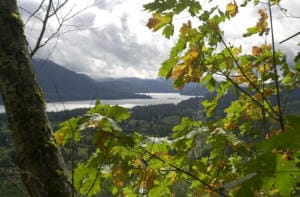 LONGVIEW — Yale Reservoir will be lowered temporarily to reduce the risk that a powerful but rare type of earthquake could damage the dam holding it back, according to federal documents.

PacifiCorp Energy, which operates Yale Dam and two other hydroelectric dams on the Lewis River, proposed lowering the reservoir under 480 feet above sea level — about 10 feet below the level considered “full pool.”

The action is a response to a routine evaluation that identified soil beneath the rock and earthen dam is “likely to liquefy in the event of an earthquake with a recurrence interval in the range of 500 to 1,000 years.”

Company officials and documents do not refer to an earthquake from a specific source, but the notice is an apparent reference to the offshore “subduction zone” megaquakes that rattle the Northwest every 500 years of so. Scientists say the last one occurred in 1700 and estimate there is a 40 percent chance the next will occur within 50 years and could hit magnitude 9, the largest in the world.

An earthquake of that magnitude would damage the dam’s embankment and allow water from its deep, 3,780-acre reservoir to pour over the top, according to a Nov. 27 letter from the Federal Energy Regulatory Commission, or FERC, to the company.

PacifiCorp spokesman Tom Gauntt said in a statement Tuesday the company is working with “industry experts to develop a remediation plan and implement necessary seismic upgrades by the end of 2023.”

Limiting the reservoir’s maximum level until then will “greatly reduce” the likelihood of water being released from the dam if an earthquake occurs before the upgrades are completed, he said in a prepared statement.

There is no immediate threat of a failure. But lowering the lake may pose problems for boat launches, though the lake from time to time is lowered even further for flood control storage. The reservoir was at 472 feet Tuesday and rose to about 477 feet during last week’s heavy rainstorms.

Gauntt said that PacifiCorp will work to minimize effects on recreation when the reservoir is lowered.

Safety concerns arose during a U.S. Geological Survey assessment of the 67-year-old structure that is part of a federal license renewal process. FERC ordered the lake to be lowered following the USGS evaluation, Cowlitz County Commissioner Dennis Weber said Tuesday.

The USGS study does not, apparently, project how much flooding would occur under the earthquake damage scenario, and the extent of damage would of course depend on how much water was in the reservoir at the time and the nature of the failure. But a rush of water overtopping an earthen dam could potentially cause a catastrophic breach.

Lowering the reservoir level would be a “prudent and acceptable” risk reduction, the FERC letter says. It would be “acceptable” if the reservoir temporarily rises above 480 feet during periods of high runoff for flood control purposes, according to the letter. (It’s federal license to operate the dams requires PacifiCorp to maintain flood storage in Merwin, Yale and Swift reservoirs every winter.)

Yale Dam now is the second dam in the local area to have earthquake-related safety concerns. In 2017, Tacoma Power announced it would keep Riffe Lake 30 feet below full level for several years after learning an earthquake could damage the spillway gates at Mossyrock Dam on the upper Cowlitz River. A failure of those gates could lead to a massive flood downstream. Tacoma Power is still working on engineering a way to reduce the vulnerability of the dam, which at 700-feet tall is the highest dam in Washington.