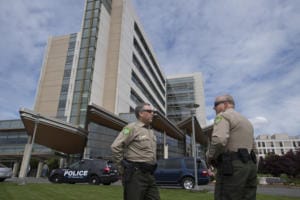 Chapman joined the sheriff’s office’s leadership when Atkins became sheriff in December 2014, overseeing enforcement operations. He previously worked for the Vancouver Police Department since 1994, most recently as a lieutenant.

“The undersheriff position is like a COO (chief operating officer) in other organizations and critical to moving the sheriff’s mission and vision forward,” Atkins wrote in an email. “I have full faith in John Chapman’s ability to do just that.”

Cooke has been on leave since December, during which Chapman has stepped in on an interim basis. Officials with the sheriff’s office said that Cooke’s leave is nondisciplinary.

Cooke joined the sheriff’s office in 1994 and was most recently a commander before Atkins tapped him as undersheriff in 2014.

“After 31 years of service, it’s time for me to enjoy retired life,” Cooke said.

Cooke said that he plans to live in Clark County for the foreseeable future but currently does not have other further professional aims.