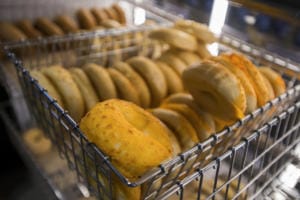 Seize the Bagel’s business is doing well after opening a third location in Orchards in September, and the bagelry is set to open a fourth outlet at the former Pines Coffee shop in Vancouver’s North Garrison Heights neighborhood.

The new location is under renovation, and owner Bruce Yamamura said he expects to post solid profits like the other three Seize the Bagel locations, which have found a way to a capitalize on Vancouver’s growth and desire for breakfast spots.

The fourth location at 8086 E. Mill Plain Blvd. is Yamamura’s smallest of the four, spanning 1,150 square feet. Because of the size, employees will make the bagels at the Orchards location and truck them over every day, Yamamura said.

Yamamura doesn’t attribute much growth of Seize the Bagel to the popularity of bagels, which he said peaked in popularity in the 1970s and 1980s on the West Coast. Instead, he attributes success to his locations.

That’s been the case for the Seize the Bagel location in Orchards, at 9609 N.E. 117th Ave., in a business park location that formerly housed a Miller Paint. Yamamura said he saw an opportunity to feed workers from nearby businesses.

Most other food spots in the area were lunch and dinner spots, but Yamamura said he suspected businesspeople were more interested in breakfast.

“That complex becomes a morgue at night,” he said. “People are there from 4:30 in the morning working with the East Coast.”

Yamamura, who leases space for all four Seize the Bagel spots, is working in his 40th year in the restaurant industry. He worked for a local Applebee’s and spent more than a decade at TGI Fridays. In 1993, he bought Seize the Bagel on Mill Plain, sold it before the Great Recession and regained ownership in 2009. In 2015, he relocated to the current Mill Plain location, 18 doors away in the Millport Shopping Center.

He opened the second location in Hazel Dell in 2017 because of the area’s growth, and the spot allowed for easy car access, he said.

“As far as opening up more,” he said, “it probably will happen.”

Seize the Bagel employs about 40 workers, and the fourth spot will require Yamamura to hire four or five more, he said.

Despite his success with Seize the Bagel and its expansion, Yamamura said it wasn’t his plan from the start.

“The dream has never been to open a whole bunch of stores and run them,” he said. “This is what I’m doing when I grow up.”