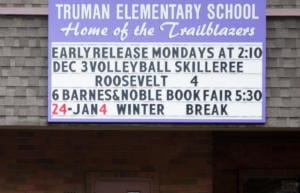 Dozens of students are out sick at three Vancouver Public Schools elementary schools, prompting cleaning, disinfecting and, in one case, a letter to parents warning them of the symptoms of the stomach flu.

At Harry S. Truman Elementary School, at 4505 N.E. 42nd Ave., 72 of the school’s approximately 520 students were out Wednesday, 61 on Tuesday and 82 on Monday. Students have fever, coughing and flu-like symptoms, district spokeswoman Pat Nuzzo said.

Some students also had vomiting and diarrhea, symptoms of viral gastroenteritis, prompting the district to send a letter to parents. District staff are advising that parents keep ill children at home until they’re well for a full 24 hours, and that everyone wash their hands, particularly before preparing food and eating, and after using the bathroom.

Two other schools have had large numbers of students out sick, albeit with a variety of symptoms. More than 50 Washington Elementary School students were out sick Wednesday, up from 47 the day before.

The enrollment at Washington, at 2908 S St., is about 330 students. That campus was to be cleaned and disinfected Wednesday night.

Nuzzo said the district is also monitoring Harney Elementary School, at 3212 E. Evergreen Blvd., where 40 of the school’s approximately 650 students were out sick Wednesday.

Adding to an already germy time of year, it’s also active flu season in Clark County. The influenza positivity rate for the week of Nov. 24 through Nov. 30, meaning the number of flu tests that came back positive, was 17.98 percent, according to Clark County Public Health.