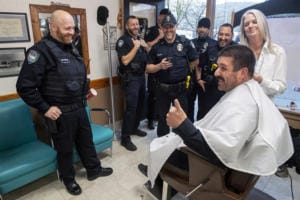 CAMAS — When Chuck Nadgwick woke up Wednesday, he noticed his family’s Elf on a Shelf had some new accoutrements: a razor and shaving cream.

The not-so-subtle sign was a reminder that it was finally Nadgwick’s day to shave. He had been growing a beard since the start of November, and his wife and 11-year-old son wanted to make sure he remembered to get rid of it.

Nadgwick is a patrol sergeant with the Camas Police Department. He and many others in the department grew their beards out last month as part of No Shave November, an effort run by a nonprofit organization that asks people to not shave during the month to raise awareness and money for cancer research. This was the third year the department participated in the monthlong event, although they added a new wrinkle this year.

On Wednesday, those still with beards took a field trip to Camas Barbershop for beard trims and shaves. The barbershop agreed to donate all proceeds on Wednesday to www.zerocancer.org, a nonprofit looking to end prostate cancer. The department decided to donate to that organization after being connected by Curdy’s Army, a group of people who organized walks and offered support to longtime Camas resident Bill Curdy, who died of prostate cancer in October, according to Tami Strunk, who works in code enforcement for the department.

The month was an extra treat for those in the department, since the department’s policy states that officers can only have mustaches, but not full beards.

“The guys have a blast with it,” Nadgwick said. “We like to see how everyone grows their beards out, since we normally can’t. I work day shift, so when I roll out of bed at 5 a.m., it’s one less thing to do.”

Shelli Axon, the owner of the barbershop, said she hadn’t counted the total yet but had about $120 in donations from customers on Tuesday. That should be combined with another few hundred dollars from Wednesday, when 100 percent of proceeds from beard trims and shaves went to the fundraiser. At one point, an officer from the Washougal Police Department stopped by with a $200 donation collected from their department to contribute.

“I was born and raised in Camas,” Axon said. “I’d do anything to help the police department and fire department. I know how hard they work to keep the community safe.”

While the beard growing and shaving was done for a good cause, it also allowed department officers to spend the month cracking jokes at each other’s expense. Those didn’t stop once the facial hair was gone Wednesday, either. Carlos Gonzalez, an officer with the department, was the first up for a shave after the rest of the department voted his as best beard.

Since the department allows for mustaches, Gonzalez and most others decided to have their beards shaved into mustaches. Gonzalez’s remaining mustache was straight out of a 1970s cop drama. When he walked out of the shop, a fellow officer told him to go find a pair of aviators to complete the look.

Gonzalez said it felt a little weird to not have the beard after a month-plus. It also felt a little cold, especially on his chin.

“The full beard feels better,” he said. “The days of Tom Selleck are over.”