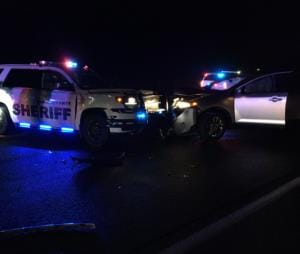 Privately-hired attorneys filed a notice of appearance Tuesday for Jessica M. Strange. The court records filed in the case do not say whether Strange has attended a court hearing yet.

A Clark County Sheriff’s Office deputy was injured after he put his patrol vehicle into the path of a Ford Edge SUV allegedly driven by Strange, the records say.

The crash occurred at 2:54 a.m. on the northbound Interstate 5 Battle Ground off ramp, according to a press release from the sheriff’s office.

It said a deputy noticed a car driving south on the northbound ramp heading toward the freeway. The deputy turned on his emergency lights and moved his vehicle to the middle of the off-ramp in an attempt to stop the driver from entering the freeway going the wrong way.

The driver failed to stop and crashed head-on into the deputy’s vehicle, the sheriff’s office said.

Strange was uninjured and was arrested on suspicion of DUI, according to the sheriff’s office. The injured deputy was treated at a hospital and released.

According to the complaint filed in the case, Strange’s blood alcohol content measured .216. In Washington, a blood-alcohol level of 0.08 is considered evidence of drunken driving.