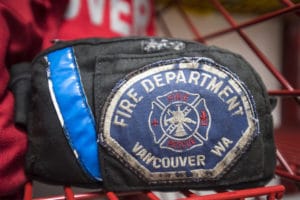 Firefighters extinguished a blaze at a home in the Harney Heights neighborhood of Vancouver on Wednesday morning.

A 911 caller told dispatchers that four people had evacuated from the home after using a fire extinguisher in an attempt to stop flames from spreading, according to emergency radio traffic monitored at The Columbian.

The first fire engine to arrive reported that there was an active fire on the second-story of the small home, with interior smoke visible from outside, according to the scanner.

Several minutes into the response at the scene, firefighters said that a fire originating from a heater on the home’s second floor may have spread into a wall. They entered the home and confirmed the fire was entirely external and had not spread, according to the scanner.

The fire was extinguished in about 10 minutes.

Firefighters remain at the scene. East 18th Street is blocked from about Todd Road to Brandt Road.

This story will be updated.