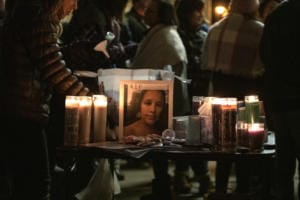 The medical examiner’s office reported Monday that Tiffany Hill, 35, of Vancouver, died from a gunshot wound to the chest.

It was also reported that Keland J. Hill, 38, of Vancouver, died by suicide “in the context of (a) law enforcement pursuit … on county roadway,” according to the medical examiner.

On Nov. 26 around 3:20 p.m., deputies responded to the school parking lot, 2215 N.E. 104th St. They found two gunshot victims in the front seats of a minivan, four bullet holes in the windshield and a smashed driver’s side window.

Three children inside the vehicle at the time of the shooting were physically unhurt. Law enforcement has not identified the second gunshot victim, who suffered injuries that were not life threatening.

The sheriff’s office identified the suspect in the case as Keland Hill, who was out of jail on bail pending a court hearing in an ongoing domestic violence case and was the subject of an active restraining order. Following a brief police pursuit, he shot himself in the head at Padden Parkway and Andresen Road and was pronounced dead at a local hospital.

Hill was a Marine Corps sergeant and had three children. She was also an active member of the Sarah J. Anderson Parent Teacher Association.