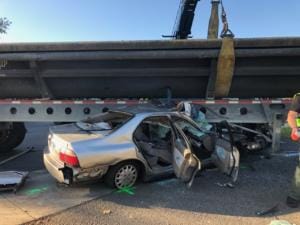 A driver is in critical condition after being pinned under a tractor-trailer Wednesday afternoon in east Vancouver.

Firefighters called a tow company to lift the semi off the totaled Honda, Fredrickson said. But they were able to extricate the driver, who wasn’t immediately identified, without the tow truck, roughly 15 minutes after crews arrived.

The Clark County Sheriff’s Office Traffic Unit remained on scene for several hours after the crash to investigate.