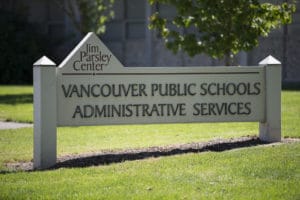 Though the ink is dry on Vancouver Public Schools’ budget for the upcoming year, don’t expect that this is the end of school finance discussions in Clark County’s second largest school district.

By a vote of 3-0, the Vancouver school board approved $661 million in expenditures for the 2019-2020 school year, a budget that reflects cutbacks to central office expenses. Director Mark Stoker had a previously arranged absence, and one seat is open on the school board.

The largest proportion of that budget is the $344.5 million general fund, which covers staff salaries and instructional programs. The district is also expected to spend $271.1 million on bond-funded capital projects as it pursues an extensive construction campaign.

And while Vancouver Public Schools is spending about $103.1 million more this upcoming school year than last year, the school district this spring and summer has pointed to increasing district expenses and limitations on state funding that school officials say left the district with an $8 million budget deficit and no choice but to start eliminating positions.

“Obviously we all need to come together … to identify and secure sustainable revenue that preserves valued services and programs that our community members want and expect from their public schools,” Superintendent Steve Webb said Tuesday night.

The district is eliminating the following positions:

• 10 centrally budgeted teachers on special assignment (often roving teachers providing support to their classroom colleagues) for a savings of $1.2 million.

• 15 percent cuts to central administration positions for an $800,000 savings.

• The elimination of one grounds maintenance position for a $75,000 savings.

The district will also use $3.8 million out of its reserve funds, and received one-time funding of $6.5 million secured by state Sen. Annette Cleveland, D-Vancouver, during this year’s legislative session. But district officials say that means they’re facing a $10.3 million shortfall in the coming school year.

“As you know, without a sustainable revenue source moving forward, we’ll be forced to address a $10.3 million budget shortfall in the next budget year,” said Webb. “And we’ll have fewer options to consider.”