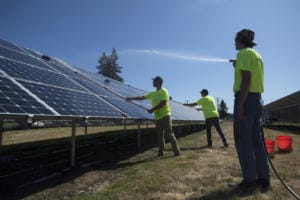 More than four years ago, the Vancouver resident spotted an item in his utility bill seeking investors for a solar project. Customers would receive state incentive checks and credits on their electricity bills.

Greenfield said his eagerness was partially based on the forecasted 60 percent return on investment after five years.

“Even though the estimates were a little optimistic and the state rebates were not quite as high, they are still very, very high,” he said. “If that were not enough, we also received payment for the electricity that our share generates.”

For every $100 put into the project, investors have received incentive checks for nearly $30, plus energy credits worth about $2.

The good news for the approximately 700 utility customers who invested is they all will recoup their investments when they receive state incentive checks this summer. The bad news is the state program will provide one final check in 2020 before it goes away. The utility’s less valuable energy credit is expected to continue for another 20 years.

The $1.4 million solar project was financed solely by community investors who, on average, invested $2,000.

Greenfield is one of about three dozen utility customers who invested the maximum, $10,000, by purchasing 100 units, each costing $100. The utility also had customers who purchased the minimum, a single $100 unit, including those who made $8.33 monthly payments spread over the year.

The solar project was built in 2015 on the northwest corner of Padden Parkway and state Highway 503, at Clark Public Utilities’ operations center, 8600 N.E. 117th Ave., Vancouver. The location was chosen for its solar exposure, community visibility and proximity to electrical infrastructure.

The project was popular from its beginning. The initial solar array sold out on the first day that customers could purchase $100 units. High demand prompted Clark Public Utilities to build four more arrays, and those $100 units were sold within a month.

During the “solar year” that ended June 30, the community solar project generated 385,549 kilowatt hours of electricity, a modest 3.1 percent increase from the previous year. It still set a record for solar-energy production since the arrays went online and will net the largest state incentive returns to date.

“We just had ideal weather for solar production,” said Matt Babbitts, the utility’s energy services project manager. “The ideal solar weather is clear and sunny but not too hot.”

It may seem counterintuitive, but summer is not the best time to generate solar energy because production declines during hot weather.

“We get a lot more value in the Pacific Northwest by having sunny days in spring and fall,” Babbitts said.

Summer performance can be further hindered by dust and other dirt that slowly coats the solar panels during dry weather. This week, student employees at the utility used Simple Green, brushes and a garden hose to clean the panels.

The utility describes the solar project as the biggest in Clark County, but its potential output is relatively small: enough electricity to power 30 homes for a year.

Overall, Clark Public Utilities has about 200,000 electrical customers in Clark County. Most of its electricity is purchased from the Bonneville Power Administration and generated by hydroelectric dams on the Columbia and Snake rivers.

The utility’s solar arrays are fix-mounted, meaning the panels do not move to maximize energy production as the Earth rotates.

“At the time in 2015 when we brought this project on line, those type of tracking systems were cost-prohibitive,” Babbitts said.

“I’m very concerned about that, as we all should be,” he said.

“There is a large percentage of these participating customers who are very passionate about environmental concerns,” he said. “And they want to be part of the solution at the local level.”

All the same, it’s unlikely Clark Public Utilities will launch another community solar project without state incentives, Babbitts said. Homeowners can get a better return on their investment by installing a solar system on their house and taking advantage of federal tax credits, he said.

Greenfield said he doesn’t want to put solar panels on his roof.

“We have an older house, and we have a beautiful shake roof that isn’t real new,” he said. “I don’t want to start putting solar panels on it. We would pretty much have to get a new roof.”

Greenfield has considered a solar roof offered by Tesla Inc., but is wary of the technology’s hefty cost. He has invested in SolarWindow Technologies Inc., which produces a transparent window coating that generates electricity.

“I am always one who has tried to be self-sufficient,” he said. “I would love to generate all my own electricity.”