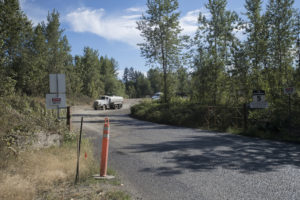 Overturning a previous decision, the Columbia River Gorge Commission took action Tuesday that could lead to shutting down a gravel mine outside Washougal.

The mine, located inside the Columbia River Gorge National Scenic Area, has drawn heated opposition from residents who say they have endured up to 200 trucks a day traveling at unsafe speeds, along with protracted noise and copious amounts of dust.

Friends of the Columbia River Gorge refers to the mining as “illegal” and says it represents “the largest ongoing land use violation” in the 33-year history of the scenic area, which protects the picturesque canyon where the Columbia River slices through the Cascade Mountains.

It isn’t clear what authority the Gorge commission has to shut down the mine. Attorneys for different parties disagree over whether the commission can issue an injunction or take other enforcement action.

“I think we had a very fair and thoughtful process this morning,” Krystyna Wolniakowski, executive director of the Columbia River Gorge Commission, said at the end of Tuesday’s hearing. “Now the staff needs to confer immediately — it is our highest priority — to determine what is within our jurisdiction to do next. And we will be able to speak to that in a few days.”

Jamie Howsley, an attorney representing Zimmerly, declined to discuss the next steps but offered one comment.

“We strongly believe the Gorge commission didn’t even have jurisdiction to hear the appeal,” Howsley said after Tuesday’s hearing. “Clark County code is very specific about where appeals should go, and that is to Clark County Superior Court.”

In 1993, the Gorge commission approved mining at the site with a number of conditions, including that the permit would be void if operations stopped for one year or longer.

The mine stopped operating in 1997. In 2017, Nutter Corp. reopened the mine, triggering objections from area residents and environmental activists who said the mine’s permit was no longer valid. Clark County subsequently notified Nutter that the company must cease operations.

Nutter and Zimmerly appealed to hearings examiner Turner, who ruled that mining could continue. Turner said mining was subject to other regulations regarding noise and air quality and he lacked jurisdiction to interpret the Gorge commission’s permits and decisions.

Gary Kahn, an attorney representing residents living near the mine, said during Tuesday’s hearing that many of his clients live along the mine’s haul route and have endured noise, dust, pollution, odors and vibration since mining resumed.

“Those are the problems my clients have been facing since approximately October 2017, which has gone on completely unfettered and unmitigated,” he said.

“It’s really important that happens today,” Baker said. “Without it, we will have won the battle but lost the war. We fully expect that if there is not an injunction, Zimmerly and Nutter will continue to violate, as they have for two years.”

But Maren Calvert, an attorney representing Nutter, argued that the Gorge commission lacks authority to issue an injunction or impose civil penalties. All the commission can do is reverse, remand or set aside the hearings examiner’s decision, she said.

Jeffrey Litwak, the Gorge commission’s legal counsel, will draft a written order for Chairwoman Lorrie DeKay to sign no later than Nov. 12. Any appeals must be filed within 60 days of the commission’s official order.

After Tuesday hearing, Michael Lang, conservation director for Friends of the Columbia River Gorge, said the commission has broad authority to issue stays and injunctions but opted to take no action.

“What that means to us is the previous Clark County notice of violation and stop work order is back in effect,” he said. “The mine has to stop, and the commission is considering the next steps it will take to enforce the scenic area act.”

Lang said he is confident either Clark County or the Gorge commission will shut down the mine.

“The real remedy is for Nutter and Zimmerly to stop operating and apply for a national scenic area permit,” he said. “It’s that simple.”