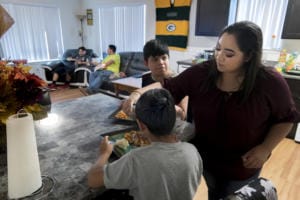 Daniel Valtierra and Vanessa Contreras went through a rough patch.

After paying his sons’ hospital bills, Valtierra didn’t have enough money for rent, so the couple was evicted from their apartment in Vancouver. After that, they doubled up with another family for nearly a year before they received help from the new Family Assistance Community Engagement, or FACE, Program.

“I just needed somebody to believe in me again,” said Valtierra, 40, who had 20 years of good rental history before the eviction.

They were connected to Council for the Homeless’ FACE Program through Contreras’ 10-year-old son’s school. The program, which has been around for a little more than a year, aims to assist people of color and those who identify as LGBTQ, who are disproportionately impacted by homelessness.

African Americans, for instance, made up about 2 percent of Clark County’s population in 2018 but represented 13 percent of Council for the Homeless’ clients. While Native Hawaiians or Pacific Islanders comprised 1 percent of the population, they made up 6 percent of homeless clients last year.

Kate Budd, executive director of Council for the Homeless, said that to effectively reduce the overall number of homeless people “we have to make sure we’re addressing the needs of populations of color, as well as those who identify as LGBTQ” because their homelessness is often connected to greater challenges such as racism, oppression and homophobia.

“Those experiencing homelessness don’t begin on level playing fields,” Budd said. “The idea of everyone can pull themselves up by their bootstraps is not a universal reality.”

According to the Supporting Partnerships for Anti-Racist Communities study published in March 2018: “People of color are dramatically more likely than white people to experience homelessness in the United States. This is no accident; it is the result of centuries of structural racism that have excluded historically oppressed people — particularly black and Native Americans — from equal access to housing, community supports and opportunities for economic mobility.”

In May 2018, Budd’s organization received a three-year, $679,615 grant from Building Changes’ Washington Youth and Family Fund to better serve minority populations. She said when the FACE Program was first announced she got pushback from community members who questioned why it was important.

The program uses the existing social services system and connects people with cultural agencies, such as the Cowlitz Tribe, National Association for the Advancement of Colored People, YWCA Clark County and Latino Community Resource Group, to increase their success with housing.

Contreras found support through Gina Ochoa, who heads the FACE Program at Council for the Homeless. When Contreras was homeless and feeling down, one thing that helped the 28-year-old weather the tough time was coming out to her family as bisexual. Ochoa was encouraging and a sounding board for other issues she tackled.

A total of 169 people or 52 households were enrolled in Council for the Homeless’ program, which uses diversion to quickly get people back into housing ideally within about two months of starting the program. Contreras and Valtierra received guidance to pay off debt from the prior eviction, as well as about $3,000 in move-in assistance.

Contreras couldn’t believe how quickly they got back on their feet.

“It was like a dream come true. We were like, ‘Wow, our own place now.’ I always thought, you know, when you had an eviction, you were always going to get turned down,” she said.

Ochoa made the couple realize that’s not always the case.

As of the end of June, 121 people, or 72 percent of participants, exited to permanent housing. None of them have returned to homelessness. (An additional 15 clients are in a two-year rapid rehousing program with Community Services Northwest, so outcomes for that program were unavailable.)

“It speaks volumes to how households are stabilizing,” Budd said.

Beforehand, 53 percent of this population exited to permanent housing, she said. The goal was to increase the percentage to 60.

Clients averaged 33 days in the FACE Program. Those who exited the program without obtaining permanent housing may have found transitional housing or emergency shelter, started staying at a friend’s place or returned to homelessness.

Budd said she’s overall pleased with the outcomes of the first year.

The most important takeaway so far, she said, is Council for the Homeless needs to make sure it’s partnering with culturally specific agencies that can help households build stability. Building relationships with landlords and providing some cultural awareness is important, too, Budd said. For instance, households from Chuuk, islands in the Federated States of Micronesia, greatly value family and may invite relatives to stay with them, breaking the terms of their rental agreement. But caseworkers can proactively inform landlords about that and mitigate future issues, possibly preventing an eviction.

As for Contreras and Valtierra, they are grateful to have a place they can call their own and dream of someday having a house in a nice area of town.

“I’m thankful I got a second opportunity,” Valtierra said.