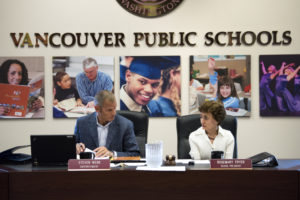 An open Vancouver school board seat attracted 13 applicants, including three people who ran and lost in the primary election.

Vancouver Public Schools is slated this month to select a temporary replacement for Position 4, which was vacated by Michelle Giovannozzi at the end of July. The four-month opening came with an unusual level of public attention as it’s in the midst of local elections. Three school board seats are open this year, including Position 4.

Here are some of the applicants for the position:

• Lindsey Luis, Scott Dalesandro and Jennifer Hawks-Conright, all of whom ran for office but failed to secure spots in the general election, submitted their applications. All three signed pledges saying they would not apply for the open seat prior to the primary election.

Luis is a recent graduate from Fort Vancouver High School and completed her term as National Youth President of the League of United Latin American Citizens.

“As a bilingual Latina, in a school district that serves over a quarter Hispanic/Latino students and families, I will bring the perspective of a member of this community,” Luis wrote in her letter of interest. There are no people of color on the Vancouver school board.

Dalesandro is a retired logistics manager who touted his business experience during his campaign, noting in his application letter that he would bring “new and creative ideas” to the school board.

Hawks-Conright, communications administrator for the Clark County Association of Realtors and a neighborhood volunteer, described her experience working with children as both a volunteer and mother. Hawks-Conright has four children, two of whom are on the autism spectrum, and praised the school district for its early childhood programs in helping her children learn and grow.

“I want to be a part of this process as a school board director,” she wrote.

• Adam Aguilera ran in the crowded field of Vancouver City Council candidates competing for Bill Turlay’s seat but came in fourth with 14.89 percent of the 23,099 ballots cast. Aguilera is a teacher in Evergreen Public Schools and has helped oversee diversity and equity training in that district, Clark County’s largest. He also holds leadership positions with the Washington Education Association and Professional Educator Standards Board.

“My background experience is well-rounded in meeting the district’s priorities to promote equity, school safety and fiscal responsibility,” Aguilera wrote in his letter of interest.

Aguilera also points to his experience as a person of color, as well as a member of the LGBTQ community, saying he is “qualified to serve all families of Vancouver Public Schools.”

• Kathy Gillespie, who was on the Vancouver school board from 2010 through 2017, has advocated for the board appointing a caretaker for the interim position — a temporary leader with no skin in the election game and with previous experience.

“I’ve decided to apply for this simple reason,” Gillespie said in an email to The Columbian. “The appointment term is brief, and I have the experience needed to hit the ground running and serve with the least amount of disruption to the system.”

Gillespie specifically noted her knowledge of district policies, state education law and the Open Public Meetings Act in her letter of interest.

“After two terms and eight years of service, I know the role and require no additional training or staff time to bring me up to speed on the specifics of the role,” she wrote. “Should the board desire a smooth transition and a bridge to the November election, I am ready to serve.”

• Holly Williams, who sat on the Evergreen Public Schools Board of Directors from July 2000 through November 2009, also applied saying she wants to fill a caretaker role. Like Gillespie, Williams wrote at length about her previous experience serving on a school board.

“It is in the best interest of the district — its students, staff and community — to appoint someone with my proven experience and extensive community involvement,” she wrote.

• Paul Scarpelli, the ousted manager of Clark County Animal Control, also applied, citing his longtime experience in the public sector. Scarpelli noted that the “complexities, breadth, diversity and political environment” of the school district and Clark County are similar.