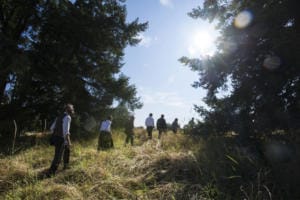 Who doesn’t love a field trip?

In lieu of their typical weekly meeting at City Hall, the Vancouver City Council loaded onto a bus Monday afternoon to take a five-hour tour around potential development sites. Armed with folders and water bottles, the councilors heard presentation from city staffers along the way about how each site might be transformed by A Stronger Vancouver, a sweeping package of public investments currently under consideration by the city council.

If enacted as written, the package would pour resources into parks and public safety programs, upping the city’s budget by around $30 million a year.

After Monday, City Manager Eric Holmes said, Vancouver’s governing body would have a better idea of what they’d be paying for, and certainly a much more tangible understanding than they could get by looking at a piece of paper from behind the council dais.

“It is night and day, firsthand getting the experience as a group,” Holmes said, walking on a pedestrian path near Columbia Tech Center Park. “To get a sense of scale, what we’re talking about — it’s one thing to see it’s 44 acres on an 8 1/2 -by-11 piece of paper, and another to actually see what that catalytic value could be.”

The tour started in northeastern Vancouver, then wound south and back west before reconvening downtown at 9 p.m. The stops included an undeveloped 44-acre plot slated to become Fenton Community Park, as well as a vacant gravel lot in the city’s Section 30 subarea and the completed Columbia Tech Center Park. The tour also stopped at Bagley Park, Fire Station 3, Father Blanchet Park and The Waterfront Vancouver.

“We wanted to provide examples of projects and investments that are really focused on economic vitality — creating jobs, growing the tax base — as well as neighborhood vibrancy,” Holmes said.

The Fenton property, located at the northeastern tip of the city, is something of a “blank canvas,” Holmes added.

The city acquired the land for $5 million last year. The L-shaped plot, which encompasses wetlands and a creek, is undeveloped and could eventually include play areas, a dog park and even some more unusual uses like a bocce ball court or BMX track, said Julie Hannon, director of Parks and Recreation.

“It’s 8.5 Esther Shorts,” Hannon told the crowd, which gathered in the grassy field to hear her presentation. “We can do eight times the amount of work here, and do eight times as many activities.”

Full development of the site would cost $20 million and would likely be built in phases, Hannon added.

The Fenton tour was followed by another blank canvas of sorts, though on a larger scale. The Section 30 Subarea was once home to what the subarea’s plan called “aggregate resource extraction and processing” sites. Now, it’s mostly abandoned gravel mines. The city is hoping to dump some strategic money into the 553-acre site to draw private investment to the area.

Chad Eiken, the city’s director of community and economic development, said Vancouver started eyeing the future of the area in 2004, before it was formally annexed into the city.

His department is hoping Stronger Vancouver funds might help the city improve the area’s usability, adding key arterial roads as well as water and sewer infrastructure.

“There are some big challenges, which is why we haven’t seen any major development here up to this point,” Eiken said, addressing the crowd that filled the seats of the C-Tran tour bus. “The properties are under different ownership and they’ve been mined to different depths.”

When completed, the site could provide an estimated 9,000 jobs, Eiken said. It also might eventually look something like the Columbia Tech Center, an east Vancouver cluster of multi-use rentals that constitutes the single biggest taxpayer to the city’s coffers, Holmes said.

“It isn’t just theory, it isn’t just supposition of what could happen. It actually has happened here,” Holmes said.

Optimism, at a price

Monday’s cheerful, field-trip atmosphere was about showing the councilors the potential fruits of hard planning work (literally, in one case: Mayor Anne McEnerny Ogle munched on a few apples she found at the Fenton property).

That work, undertaken by the Stronger Vancouver Executive Sponsors Council, lasted two years and resulted in a package of projects aimed at making the city safer, more livable and more attractive to employers.

Consisting of around 60 items, the plan is a comprehensive look at how to manage the city’s explosive growth. It includes 34 capital projects — 25 of which involve revamping or building a new park, like at Fenton — as well as an overhaul of operating services, encompassing everything from pedestrian safety to fire sprinklers to a new arts and culture program.

But some residents and businesses have balked at the price tag. The new programs would add $30.1 million to the city’s annual budget, split three ways between increases in property taxes ($9.7 million), business taxes ($9.7 million) and other miscellaneous fees ($10.7 million).

Upon first presenting the proposals to the city council back in April, executive council member Tim Schauer called A Stronger Vancouver “a big ask.”

“It’s a hard conversation, but I think it’s an important one,” Schauer said.

Each of the proposals in the plan is still under consideration, and the city council is expected to vote on a final package by the end of the year, according to Holmes.