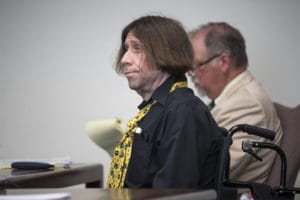 A man was found guilty of premeditated murder Tuesday for killing his mother and dismembering her body in February 2017 at their Vancouver home.

Kenneth Jay Moore, 48, stood quietly while the verdicts were read aloud before sinking into his seat.

A Clark County Superior Court jury convicted Moore of first-degree murder, with an enhancement for an egregious lack of remorse, in the death of Leisa A. Holt, and second-degree assault with a firearm on a law enforcement officer. The assault conviction stems from Moore pointing a rifle at a responding officer, prompting a SWAT response.

After presenting evidence for nearly a week, the prosecution rested Monday morning. The defense did not present any witnesses and rested shortly after the case was turned over. Moore flipped-flopped over whether to testify but ultimately decided against it.

During closing arguments Tuesday morning, Senior Deputy Prosecutor Kasey Vu told the jury that in a three-day window, Moore “brutally, viciously, violently” killed Holt, 60, and cut up her body for disposal. Her legs were found wrapped in trash bags in the kitchen. Her torso was on a cutting board in a shower stall with cutting instruments still on top of her, he said.

Vu argued that Moore was angry at his mother, likely over her love interest.

Holt and her boyfriend, Jeff Hesterley, were approaching seven months as a couple. They spent the days leading up to Valentine’s Day together, staying overnight Feb. 13 at the Hampton Inn & Suites in Vancouver. They ate lunch the next day with Hesterley’s parents. Afterward, Holt did some shopping at Banana Republic, before presumably heading home.

“That was the last time anyone saw her alive, except for the defendant,” Vu said.

Investigators know Holt was still alive around 6 p.m. Feb. 14, Vu said, because she sent someone a text message. However, she did not open messages sent to her later in the evening, and her cellphone was eventually found in Moore’s bedroom.

Her body was discovered Feb. 17 after her boyfriend and police conducted a welfare check.

Hesterley had stayed at Holt’s residence a number of times but never saw or talked to Moore. He knew Moore didn’t like him, however, because when he once offered to fix Holt’s car heater, Moore shouted from his room, “Don’t let that (expletive) use my tools,” Vu said.

Holt took care of Moore and “catered to all of his needs and whims,” Vu said. With Hesterley in the picture, Moore likely thought his mother was going to abandon him. When she returned home on Valentine’s Day with her gifts from Hesterley in tow, and after being gone the night before, an argument probably broke out, Vu said.

Holt’s injuries indicate she fought for her life, he said, based on the defensive wounds on her hands and wrists. Her hyoid bone, located in her throat, was fractured from being strangled, her neck was slashed, and she had nearly a dozen lacerations to her head and face, Vu said as he showed the jury photos of Holt’s body. Moore’s fingerprints were found on the tape used to package his mother’s legs, Vu said, and his DNA was found on a knife that had her blood, hair and DNA on it.

“This was a horrific crime that, unfortunately, no one will forget,” Vu said.

Defense attorney Louis Byrd Jr. told the jury “this is a case that has graphic challenges.” He said it’s human tendency to want to take care of “the pack,” and that jurors were likely prejudiced to a degree by seeing the gruesome photos. He urged jurors to not let their passions flow into their deliberation.

Byrd left the jury with a simple question: Moore was a virtual recluse, so why would he harm his primary source of support?

Jurors returned their verdict within an 1½ hours of deliberating. Moore will be sentenced Thursday morning.