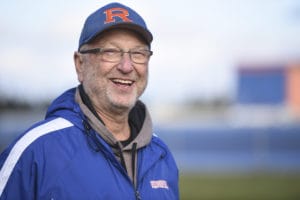 Anchors never let his failing heart stop him from coaching the sport he loves: softball. This spring was Anchors’ third season coaching the Spudders’ softball program. He led Ridgefield to back-to-back Class 2A state appearanes in 2017 and ’18.

In a letter Anchors wrote last Thursday, the day he entered hospice care in Salmon Creek, he shined light on how sports — particularly softball — impacted his life for 30 years.

“It has allowed me to go places,” Anchors wrote, “meet people, and experience great events and championships. The wins, losses, and more importantly, the lives of young female student-athletes I have effected.”

Anchors arrived at Ridgefield in 2017. Before then, he coached softball for seven years at Bremerton’s Olympic High and also assisted at Battle Ground and Eastlake in Sammamish.

In September, Anchors told The Columbian in a story interview he had a renewed lease on life when doctors downgraded his December 2017 stage 4 heart failure diagnosis to stages 2-3 by last fall.

Anchors said then he credited his mental attitude and a big heart from the Spudders.

“I’d like to think that was a good part of it,” he said in September. “I had the Ridgefield softball community behind me and the power of good thoughts.”

Ridgefield (16-4 overall) wrapped up second place in the 2A Greater St. Helens League to qualify for this week’s 2A District tournament in Longview. The Spudders open district play at 4 p.m. Thursday against Centralia at Longview’s 7th Avenue Park.