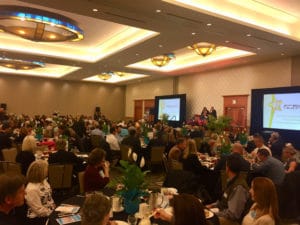 The important role that parks play in our communities and the people who support them were honored at Tuesday’s Parks Foundation of Clark County annual luncheon and membership meeting at the Hilton Vancouver Washington.

The nonprofit foundation supports a variety of parks and recreation programs, and has presented nearly $1 million in contributions over its 20 years. Another $73,401 in grants were presented Tuesday, funding everything from a new Spin Max Tower at Vancouver Lake Park’s playground to summer camp scholarships for kids.

Outgoing board member Dan Clark of Banner Bank was thanked with a special award for his 15 years of volunteer service.

As always, a major part of the luncheon was presenting the Florence B. Wager Awards.

This year’s Wager Awards winners are:

• Laura Hoggatt, an administrative assistant with Clark County Parks, was presented with the Tributary Award recognizing contributions by parks and recreation professionals. She was honored for her work in overseeing elements of the parks fee program, coordinating monthly park advisory board meetings, providing outreach and coordination for the Lewis & Clark Trail project, helping with grant administrative support and assisting the parks manager with daily needs.

• Jerry Acheson received the Leading Eagle Award. Acheson has been Camas’ parks and recreation manager for nearly 30 years, and has led the Legacy Lands project to acquire 140 acres on the north shore of Lacamas Lake for recreational use; to date, 70 acres have been donated or acquired, and purchase of the remaining land is underway. Acheson has also worked with Georgia-Pacific to gain city control of the two dams that create Lacamas Lake, plus the Mill Ditch.

• Cassi Marshall, one of two recipients of the V-Formation Flyer Award, has served on the Camas Parks and Recreation Commission since 2010, and organizes the Ivy League, a group of volunteers who regularly pull invasive ivy in Fallen Leaf Lake Park that would otherwise kill the trees. She’s also a volunteer and helped raise money for various parks and recreation projects.

• Erin Beck was the other recipient of the V-Formation Flyer Award. She was honored for her work with many youth programs, including Vancouver’s Teen Late Night and Everybody Plays programs, the Police Activities League and the Good Sport Equipment Connection program. She’s a member of the parks foundation’s board.

• iQ Credit Union won the inaugural J. Scott Campbell Award, created in the name of the community volunteer and activist who died in 2017. It recognizes corporate leadership in parks, trails and recreation programs. The credit union helps put on the parks foundation’s annual golf tournament and fundraiser, and sponsors the Good Sports Equipment Connection and other programs.