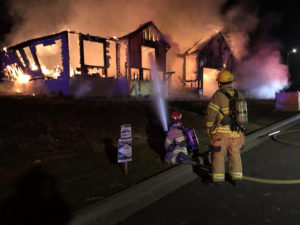 The La Center Police Department is asking for the public’s help in uncovering any information about the suspect or suspects of several arson fires.

Investigators have been looking into the fires in a neighborhood under construction at Aspen Avenue and West 13th Way, the police department said in a crime bulletin posted to Facebook.

“The fires are believed to be related and have been committed by the same suspect(s). Witnesses to the latest fire have provided some suspect information,” the post says.

The first in a series of arsons happened in February. Clark County Fire & Rescue crews were dispatched at 2:12 a.m. Feb. 28 to an under-construction house on West 13th Street, near La Center city limits.

Firefighters found a single-story home “with heavy fire throughout the building,” Division Chief Ben Peeler said. It took firefighters about 10 minutes to get the blaze under control, but the unfinished building was completely destroyed.

Then, in early April, Assistant Clark County Fire Marshal Curtis Eavenson told The Columbian the fire was likely an arson, “mainly because there is no other (ignition) source available. There was no electricity hooked up to the building.”

There have been other incidents in the area where things were burnt on work sites, Eavenson said.