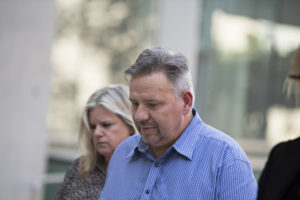 Former Living Hope Church pastor John Bishop was granted a second extension to explain why he’s appealing his drug-smuggling sentence, in part, because his new attorney has had a difficult time reaching him in prison.

Bishop, 56, was arrested in December 2017 for attempting to smuggle nearly 300 pounds of marijuana into the United States from Mexico. He later pleaded guilty, and following a number of contentious hearings, was sentenced the day before Thanksgiving to five years in federal prison.

The story of how the former Vancouver pastor became a convicted drug-smuggler was detailed in a series of Columbian stories published in September. Bishop was also featured in an April 19 Vanity Fair story called “The Church of Living Dangerously: How One of America’s Biggest Pastors Became a Drug Runner for a Mexican Cartel.”

In December, Bishop penned a handwritten letter announcing his intent to appeal his sentence to the 9th U.S. Circuit Court of Appeals. The letter didn’t explain the grounds for his appeal, and a legal brief providing those details was initially due March 4, but he was granted an extension to May 15.

Now, his opening brief is due July 16. The government did not oppose the extension.

In the meantime, Bishop remains at the medium security Federal Correctional Institution in Florence, Colo. He is set to be released Dec. 29, 2022.

Bishop’s appellate attorney, Benjamin Cheeks, outlined a number of reasons for the request, including his case load. Cheeks wrote that he’s handling at least 30 cases in varying stages on the trial and appellate levels in federal court.

Communicating with Bishop at the prison has also proved to be challenging.

Cheeks wrote in his motion that he tried to contact Bishop on March 6, March 14 and April 3 to discuss “the very pressing issue of him not actually having secured a right to appeal outside of an Ineffective Assistance of Counsel Claim, as well as to discuss his request for admittance to the Bureau of Prisons’ Residential Drug Abuse Program.”

However, each time he called the prison, he was unable to talk to a person. His office then contacted the prison’s executive assistant by email to schedule a legal call for April 17. During that call, Bishop said he’s been unable to enter the residential drug abuse program because he doesn’t have documentation of his drug addiction, and the transcripts from his sentencing are sealed.

“Given the limited window of opportunity for Mr. Bishop to enter into (the program), as well as the potential benefit he stands to receive by participating in the program, the undersigned made Mr. Bishop’s (program) entry a priority,” Cheeks wrote in the motion.

He requested on May 9 that three specific pages of the sealed records be released to aid Bishop’s entry into the program.